My first attempt at extending the inputs to use primes (Player 2.2) did not work very well - the improvement in performance over Player 2.1 (the same but without the primes input) was quite small. My next attempt - Player 2.3 - extends the prime input.

In particular it adds four new inputs for each player, instead of one. They are:


The idea was similar to how checker counts are distributed among several inputs: it lets the network find a more complex nonlinear dependence on count. 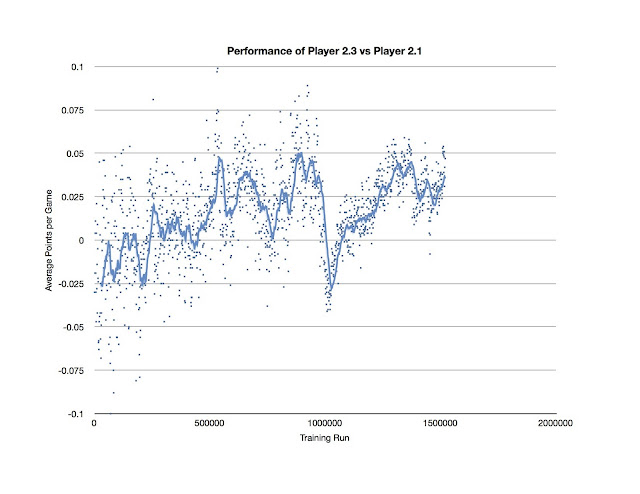 It did not perform particularly well. I took the player at the end of the training and played 100k money games against Player 2.1. It scored +0.0107ppg, with a standard error of 0.0045ppg. So significant at better than two standard errors, but just barely. I'm unsure whether the improvement is really due to adding the new input, or if it's just because I trained Player 2.1 for longer and with smaller alpha.

Perhaps the inputs are still not set up optimally. Maybe I need to note the position of the max prime somewhere, rather than just the max count.

Note that Player 2.3q - the one I use for filtering moves in multiple-ply calculations - is an example of Player 2.3, but with only five hidden nodes.