The next input I tried adding was a primes count: it counts the max number of consecutive points on the player's side of the board (positions 1->12). Of course, two inputs, one for each player.

I trained the player (which I'm calling Player 2.2) and benchmarked its performance against Player 2.1 with 1,000 games every 1,000 training iterations. Results below: 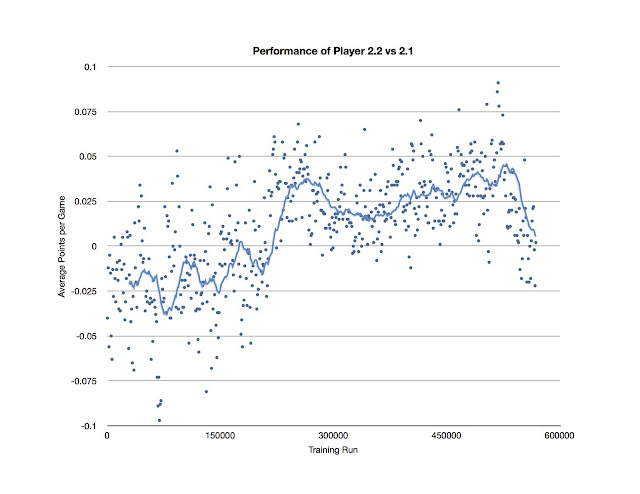 The blue dots are the scores of the new player in 1,000-game matches, and the blue line is the rolling 30-point moving average.

The standard error on the ppg score in 30k trials is around 0.009ppg (determined by experiment running Player 2.1 against itself), so +0.017ppg is less than two standard deviations from zero - barely significant.

I've seen a post on a backgammon forum that states prime counting is an important extra input, but these results do not show it. It might be because of how the input was set up: max # of primes / 6. In reality it's a lot better to have six primes than to have five, because you box the opponent in (if he's got a checker behind the prime). So perhaps some kind of splitting of the count among multiple inputs would do better. I'll try that next.