I trained another version with 10 hidden nodes (from initial small random weights this time) and benchmarked it against the  trained 80-node version. It converged relatively quickly: in about 75k training runs (all at alpha=0.1): 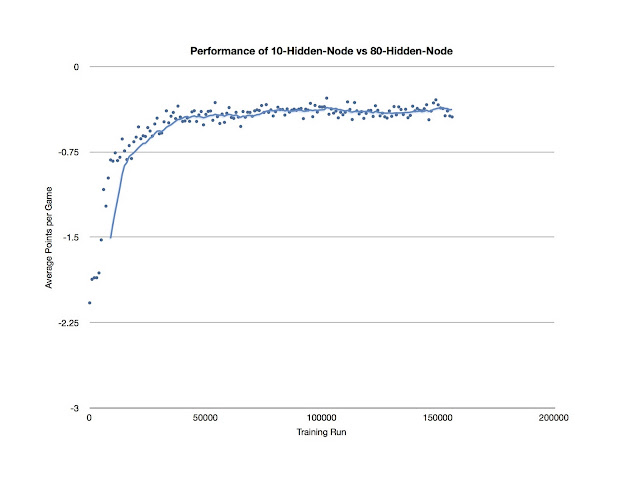 Its converged performance against the 80-node benchmark, however, was quite poor. In a 10k-game match it scored -0.417ppg on average and won 36.9% of the games. It won +0.056ppg against pubeval in a 10k-game match and 51.7% of its matches. (Note: pubeval results were updated after the pubeval player was fixed.)

The next version had 40 hidden nodes. Benchmarked against the 80-hidden node version in training: 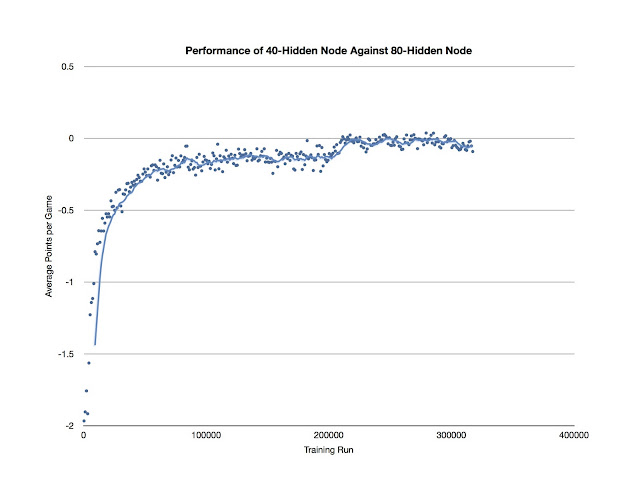 It used alpha=0.1 for the first 200k runs then switched to alpha=0.02, and seemed quite converged by 250k training runs.

The final test was for 120 hidden nodes. Benchmarked against the 80-hidden node version in training: 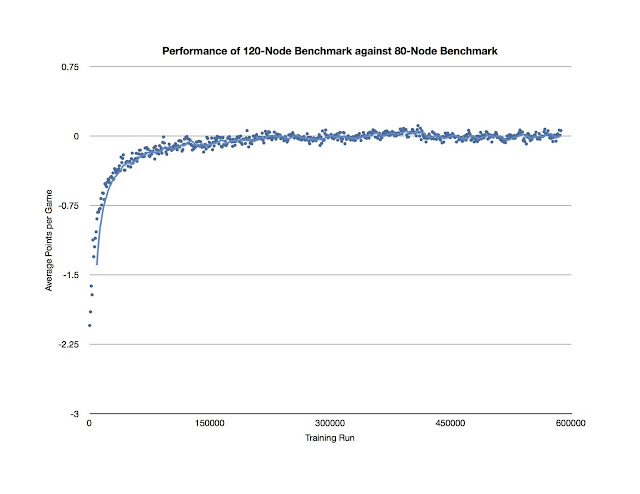 As with the other training, I started with alpha=0.1 and dropped to alpha=0.02 after 200k runs. The network looks converged after roughly 300k training runs.

The equity difference vs the 80-node benchmark was looking quite small so for a comparison I ran 30k games to reduce the statistical error (vs 10k games for the previous two tests). In those games the 120-node player score -0.018ppg and won 49.0% of the games.

The 80-hidden node benchmark seems to be the best of the 10, 40, 80, and 120-node choices. It is clear for the 10- and 40-node versions that adding more nodes improves performance. It is somewhat surprising that moving to 120 nodes showed a decline in performance, though the difference was small. It seems like convergence in the hidden node direction is around 80 nodes for this type of setup. I will continue to use the 80-node version of Benchmark 2 as a future benchmark.