Here is a chart of training performance vs Benchmark 1 over 450k training runs. I started with the Benchmark 1 network weights and added small random backgammon->middle weights (uniform random between -0.1 and +0.1). I used alpha=0.1 for the first 200k runs and then dropped to alpha=0.02. 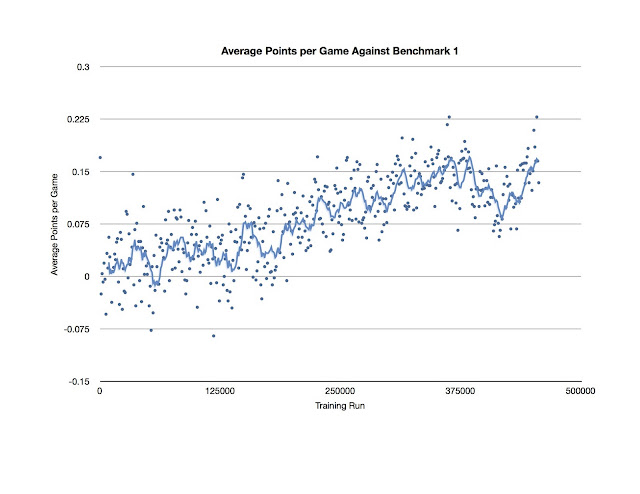 The blue dots are the results of 1,000-game matches against Benchmark 1, and the blue line is the 10-match moving average. It looks reasonably converged after 450k iterations.

It is somewhat surprising that it took so long to converge: I haven't checked, but based on the Benchmark 1 and Player 2 training from scratch, I would have expected training from scratch to converge in around 300k iterations. And starting from a more sensible point (the Benchmark 1 weights) should have made it better. That said, training the backgammon weights is the slowest bit of training since most games do not end in backgammon.

Benchmark 2 also uses 80 hidden nodes and the standard Tesauro inputs (less the two inputs noting whose turn it is, as usual). I added two custom inputs: one which is zero if the player can still be backgammon and one if the player cannot be backgammon; and another similar one for the opponent. These two extra nodes let the backgammon output nodes identify more exactly when they should be zero.

In a 10k-game match against pubeval it averages +0.426ppg and wins 64.3% of the games. (Note: updated with corrected performance after I fixed the pubeval player.)

Also somewhat surprising that it is essentially equivalent in performance to Player 2, which has the extra race network and uses a one-sided bearoff database. I suspect this means that the race network is not particularly efficient for Player 2.