I re-ran the comparison between the normal and symmetric networks, after fixing both their respective training so that they properly calculate board values assuming the opponent holds the dice. 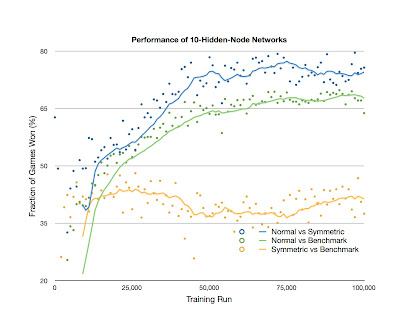 The y-axis shows probability of win, since again, these networks have only one output. The benchmark is the same one I'm comparing the other new network against (80-node normal network with win and gammon outputs, but not trained efficiently - still, much better than pub eval).

The symmetric network does much, much worse than the regular one. So we can really put this to bed now.