The earlier work was not in vain: I generalized the network so that they do not make the symmetry assumptions, but used the symmetry network weights as starting points for the training of the generic networks. That allowed relatively fast training.

Here are some results showing the training performance for 20-, 40-, and 80-hidden node networks: 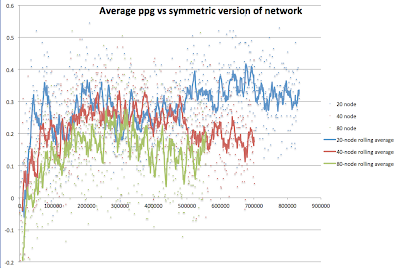 In all cases the trained networks performed around +0.2-0.3ppg vs their benchmarks, and in the maximal cases got to about +0.4-0.5ppg. (In the 200-game comparison runs done every 1,000 training iterations.)
These results show that the training does continue to improve the performance of the bots, even without adding a separate race network. However, there are some mysteries that I am still trying to decipher:
"Training fails" above means that the weights become large and positive for the probability of win and probability of gammon win nodes, and large and negative for the probability of gammon loss node. And of course the measured performance of the network vs its benchmark is terrible.
I am not sure why this is happening, and I want to sort that out before I move on to adding a separate race network.
Posted by Mark Higgins