I finished 2M training runs (again with alpha=beta=0.1, no alpha/beta damping or backtracking) on the new network which has two output nodes, after correcting the bug. Here are the results: 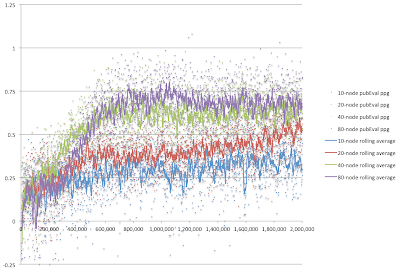 The bug ended up not making that much difference; the trained networks still perform extremely well against the pubEval benchmark.

So much so that pubEval probably isn't a great benchmark anymore. The trained networks backgammon pubEval almost a quarter of the time, which is not realistic.

Note: I discovered (much) later than I had a significant bug in my pubEval implementation. After fixing that it's a much stronger player. I also had some significant bugs in my network design that held them back. Check out posts from Jan 2012 to see proper results.

Now to look at some example games that the trained networks play against themselves to get a feel for how good they are...