This first implementation assumes a constant jump volatility, so does not make any attempt to calculate a local jump volatility in the game state. It's meant to be a benchmark to compare against the Janowski strategy with a single cube life index, which should be pretty similar in performance.

I ran one million cubeless money games of the jump model with different jump volatilities, vs the Janowski strategy with the optimal single cube life index of 0.7. The goal was to see which jump volatility value would give the best performance.

In the paper I made an estimate of a constant jump volatility of 7.7% based on a calculation of the average absolute probability change from turn to turn when the cubeless win probability was near the take and cash points. That was only an approximate calculation, based on crude windows of win probability, but should be roughly what comes out of this more careful analysis.

Here are the results of the games: 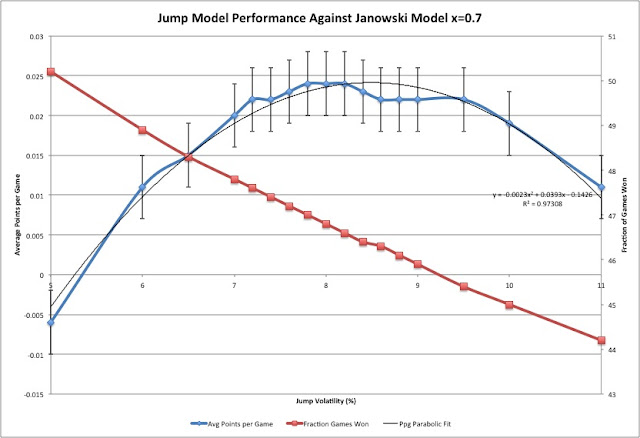 The jump volatility with the best ppg performance was 8.0%, quite close to the naive estimate from cubeless play statistics of 7.7%. But a jump volatility anywhere in the range 7.0% to 9.0% performed quite comparably. I fit a parabola to the ppg data and that suggests an optimal jump volatility of 8.5%, which is probably a more realistic number given the statistical uncertainty on individual points.

The jump model with constant jump volatility performed marginally better than the Janowski model with a single cube life index, though the margins were small: a few hundredths of a point per game, in games with an average cube value of around 2.3. The differences are statistically significant (the standard error for all ppg numbers is +/- 0.004ppg) but only because I ran 1M games; really the performance is practically indistinguishable.

That is roughly what one would expect given that the model with a constant jump volatility and constant conditional win and loss amounts W and L can be mapped directly onto Janowski's model with a single cube life index. Of course W and L are not actually constant, so the models are not practically the same, but they should be close.